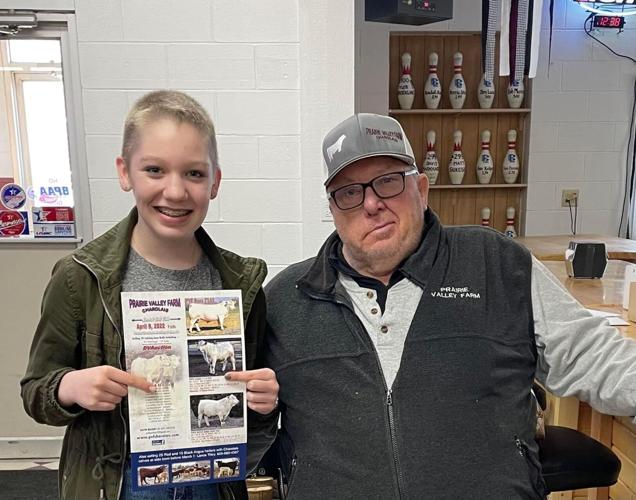 Addie Walstad poses with her uncle David Mason. After Addie was diagnosed with a form of non-hodgkin's lymphoma, Mason named one of his Charolais bulls in her honor. The bull will sell at Prairie Valley Farm annual bull sale with 25% of the profits going toward a college fund for Walstad.
A bull sale flier isn’t a typical gift one might bring to a girl’s 14th birthday party.  But it’s exactly what David Mason brought to his great niece Addie Walstad’s celebration at the Platte Bowling Alley – and it was easily the most memorable gift there.

​As pins crashed to the floor down the wooden lanes, tears flowed down the cheeks of the Walstad family when Mason showed the family a catalog picture of Bull PFVC ADDIE 1114 PLD, a bull named in honor of his great niece.
Mason owns and operates Prairie Valley Farm at Platte, South Dakota. He told Addie and her family that at his annual Charolais bull sale on April 9, 25% of the proceeds from Addie’s bull would go toward a college fund for the Platte eighth grader. 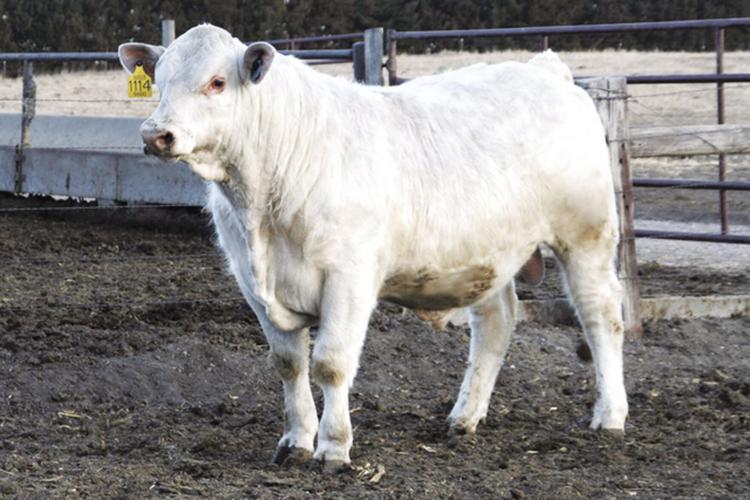 PFVC ADDIE 1114 PLD, otherwise known as “Addie’s bull,” from Prairie Valley Farm in Platte, S.D. He will sell at the farm’s annual bull sale April 9, 2022.
The fact that the Walstad family was able to gather for the birthday party was in itself worth celebrating.

On Sept. 14, 2021, Walstad was diagnosed with diffuse large B-cell lymphoma (DLBCL), the most common type of non-hodgkin's lymphoma in adults, though rare in adolescents and children.

The variation accounts for about 22% of newly diagnosed cases of B-cell NHL in the United States.  DLBCL can develop in the lymph nodes or in “extranodal sites” (areas outside the lymph nodes) such as the gastrointestinal tract, testes, thyroid, skin, breast, bone, brain or essentially any organ of the body. It may be localized (in one spot) or generalized (spread throughout the body). Despite being an aggressive lymphoma, DLBCL is considered potentially curable, according to the Lymphoma Research Foundation.  Walstad’s cancer was in her legs.

After months of pain in her right leg, she was diagnosed with an osteoid osteoma (a benign tumor). That was December 2019, and she had the tumor removed in January 2020. This was followed by routine X-rays, scans and images of her leg along with regular orthopedic doctor appointments until August 2021 when it was determined that her leg needed further evaluation. This led to the diffuse large B cell lymphoma diagnosis.

After five months of chemotherapy, along with an antibody infusion, her immune system was all but wiped out.
Understandably, Walstad’s parents had kept her home from school, church activities, sporting events and the like to keep her as healthy as possible.

“We didn’t do Christmas or Thanksgiving or anything like that. She’s basically been home for the past six months since she was diagnosed” said Erin Walstad, Addie’s mom.

So when Addie walked out of Minnesota Children’s Hospital in Minneapolis following her last treatment Jan. 24, the Walstad family knew they had to do something special for her.

They planned a surprise birthday party at the bowling alley only to be surprised themselves by Mason’s generous gift.
Walstad said she felt honored when her great uncle told her about his gift.

“This means so much to me. I thought that it was pretty cool when he surprised me with it on my birthday,” she said.
Erin Walstad said it’s all just part of her uncle’s nature.

Mason doesn’t have any children of his own, so has always treated his nieces and nephews like his own kids, she added.
Having the bull named in her honor is special to Walstad and her family, but the college fund is equally special.
“Learning and her education are very important to her,” Erin Walstad said.

Walstad returned to school on March 14. She began going back half days and has since returned full time.
While it was tough for Walstad to miss something so important to her, let alone have to undergo rigorous invasive treatments, Erin Walstad said her daughter’s attitude was inspiring.

“She is stronger than my husband and I. She handled it better than us most days,” she said.

A girl known for her smile, Walstad didn’t let her diagnosis break her spirit. Her smile never stopped.

Walstad approached her diagnosis like, “OK, I have cancer. What do I have to do? And I'm going to do it.”  And then she did it. She kicked cancer to the curb.

But her strength is more than just a physical thing. Her emotional and spiritual strength have shone brightly throughout these last six months.

But sometimes, being strong makes it difficult to receive help in times of weakness. And Walstad’s community certainly stepped up to help.

“Addie is one of those kids that really never asks for anything. She is always very humble and always grateful for whatever she gets. She's very quiet. So all of this has been kind of hard for her to be on the receiving end,” her mom said. “To see the love and support that Addie has gotten really humbles her because she doesn't expect it. She’s been blown away by people's generosity and outpouring of love for her.”

Addie Walstad is wise beyond her years. After facing cancer, she stands tall and proud and inspires anyone who meets her with a message of hope:

“I would want other people to know that bad things happen in life, but something great will always come out of it.”
She said she hopes her message will reach even more people through the bull named in her honor.
Written by:
​Melisa Goss, Associate Editor for the Tri-State Neighbor, is a South Dakota farm girl whose love of travel has allowed her to see ag’s vital impact around the world, from America’s heartland to the rice paddies of Southeast Asia and many places in between. She makes her home in Sioux Falls with her husband, daughter and miniature schnauzer.
© Prairie Valley Farm, Inc.
Privacy Policy